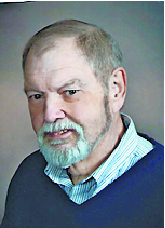 Michael K. Boushell, 74, of Easton, PA, passed away Wednesday, April 17, 2019, at Phoebe Home, Allentown, PA, surrounded by his loving family. He was born April 9, 1945, in East Stroudsburg, PA, to the late Kathryn Elaine (James) Boushell and John Joseph Boushell. Michael graduated from East Stroudsburg High School and East Stroudsburg University, where he excelled in football, baseball and basketball.
Mike was a beloved English teacher and coach at Bangor High School and Palisades High School. He was the head baseball coach while at Palisades for 15 years and coached football at Palisades as well as Notre Dame High School at Green Pond. Michael retired from Palisades after 32 years of teaching.
Before his illness, Mike was a member of the Great Lehigh Valley Writers Group (GLVWG). He was a frequent contributor to the Opinion Page of the Express-Times, where he voiced his deep felt political beliefs. He was a published author of four young adult sports novels. Michael was a member of Forks United Church of Christ, Stockertown, PA, where he enjoyed singing in the men’s choir.
He and his wife, Katharine Rufe Kandl Boushell, were married for 27 years. He is also survived by sons, M.Mathew Boushell (fiancee, Patti Spott Stiner) of Thornhurst, PA; Craig Boushell of Hellertown, PA; Michael Casey Boushell (wife, Kaitlin) of Baltimore, MD; step-son, Charles J. Kandl (wife, Lisa) of Pen Argyl, PA.; two daughters, D. Stacey Applegate (husband, Frank) of Catasauqua, PA, and Heather Boushell of Easton. Mike is also survived by four sisters, Dr. Marilee Glauser (husband, Sheldon) of Boyton Beach, FL; Mary E. Cabatbat of Pahoa, HI; Maria Fuiava, Pahoa, HI; Ruth Watkins, Mt. View, HI (husband, William); 10 grandchildren, and many nieces and nephews. He was preceded in death by a brother, Patrick J. of Berkley, CA.
A memorial service to celebrate Michael’s life will be held May 11, at 11 a.m. at Forks UCC, 4500 Sullivan’s Trail, Stockertown, PA. Visitation is at 10 a.m. at the church.
In lieu of flowers, contributions may be made in Michael’s name to the church.

Offer Condolence for the family of Michael K. Boushell